I often get into discussions with people, where the matter of strictness and expressiveness of a static type system comes up. The most common one, by far, is Go’s lack of generics and the resulting necessity to use interface{} in container types (the container-subpackages are obvious cases, but also context). When I express my view, that the lack of static type-safety for containers isn’t a problem, I am treated with condescending reactions ranging from disbelief to patronizing.

This is an attempt to write my thoughts on both of these (though they are not in any way novel or creative) down more thoroughly. Discussions usually don’t provide the space for that. They are also often charged and parties are more interested in “winning the argument”, than finding consensus.

I don’t think it’s particularly controversial, that static typing in general has advantages, even though actual data about those seems to be surprisingly hard to come by. I certainly believe that, it is why I use Go in the first place. There is a difference of opinion though, in how large and important those benefits are and how much of the behavior of a program must be statically checked to reap those benefits.

To understand this, we should first make explicit what the benefits of static type checking are. The most commonly mentioned one is to catch bugs as early in the development process as possible. If a piece of code I write already contains a rigorous proof of correctness in the form of types, just writing it down and compiling it gives me assurance that it will work as intended in all circumstances. At the other end of the spectrum, in a fully dynamic language I will need to write tests exercising all of my code to find bugs. Running tests takes time. Writing good tests that actually cover all intended behavior is hard. And as it’s in general impossible to cover all possible execution paths, there will always be the possibility of a rare edge-case that we didn’t think of testing to trigger a bug in production. 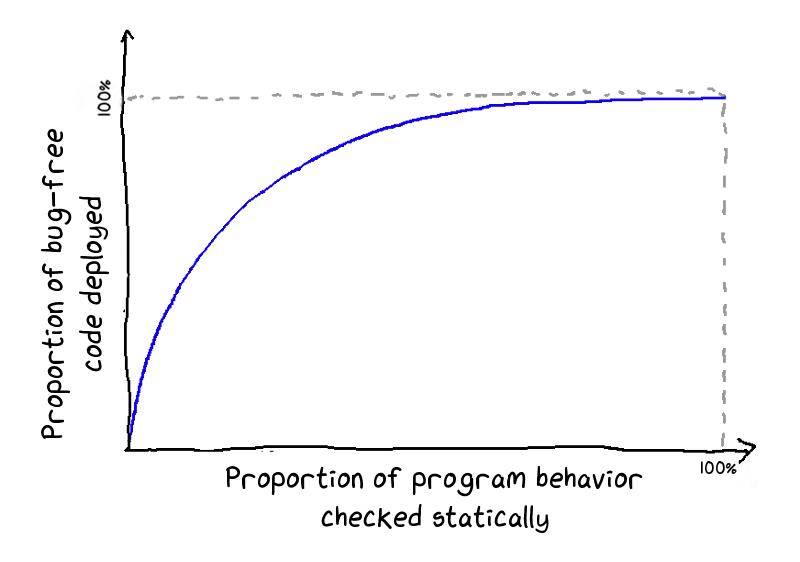 This is usually the understanding, that the “more static typing is always better” argument is based on. Checking more behavior at compile time means less bugs in production means more satisfied customers and less being woken up at night by your pager. Everybody’s happy.

Why then is it, that we don’t all code in Idris, Agda or a similarly strict language? Sure, the graph above is suggestively drawn to taper off, but it’s still monotonically increasing. You’d think that this implies more is better. The answer, of course, is that static typing has a cost and that there is no free lunch. 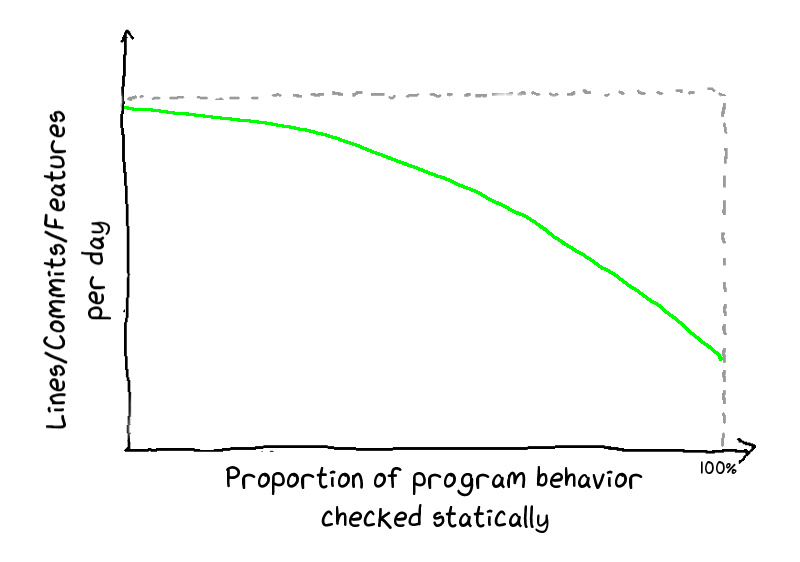 This is what we mean when we talk about dynamically typed languages being good for rapid prototyping. In the end, however, what we are usually interested in, is what I’d like to call velocity: The speed with which we can deploy new features to our users. We can model that as the speed with which we can roll out bug-free code. Graphically, that is expressed as the product of the previous two graphs: 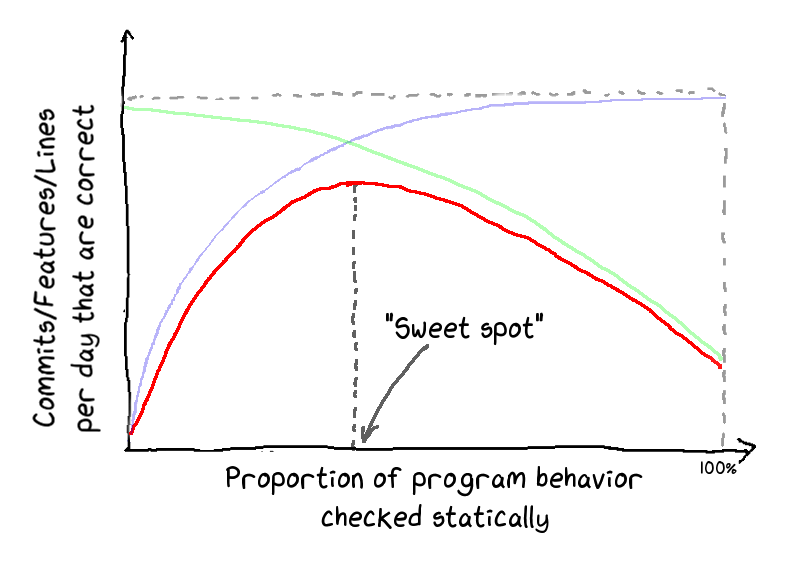 In practice, the product of these two functions will have a maximum, a sweet spot of maximum velocity. Designing a type system for a programming language is, at least in part, about finding that sweet spot1.

Now if we are to accept all of this, that opens up a different question: If we are indeed searching for that sweet spot, how do we explain the vast differences in strength of type systems that we use in practice? The answer of course is simple (and I’m sure many of you have already typed it up in an angry response). The curves I drew above are completely made up. Given how hard it is to do empirical research in this space and to actually quantify the measures I used here, it stands to reason that their shape is very much up for interpretation.

What’s more, the importance of these factors might vary a lot too. If you are writing avionics code or are programming the control unit for a space craft, you probably want to be pretty darn sure that the code you are deploying is correct. On the other hand, if you are a Silicon Valley startup in your growth-phase, user acquisition will be of a very high priority and you get users by deploying features quicker than your competitors. We can model that, by weighing the factors differently:

I think when we talk about how strict a type system should be, we need to acknowledge these subjective factors. And it is fine to believe that your perception of one of those curves or how they should be weighted is closer to a hypothetical objective reality than another persons. But you should make that belief explicit and provide a justification of why your perception is more realistic. Don’t just assume that other people view them the same way and then be confused that they do not come to the same conclusions as you.

Back to Go’s type system. In my opinion, Go manages to hit a good sweet spot (that is, its design agrees with my personal preferences on this). To me it seems that Go reaps probably upwards of 90% of the benefits you can get from static typing while still being not too impeding. And while I definitely agree static typing is beneficial, the marginal benefit of making user-defined containers type-safe simply seems pretty low (even if it’s positive). In the end, it would probably be less than 1% of Go code that would get this additional type-checking and it is probably pretty obvious code. And meanwhile, I perceive generics as a language feature pretty costly. So I find it hard to justify a large perceived cost with a small perceived benefit.

Now, that is not to say I’m not open to be convinced. Just that simply saying “but more type-safety!” is only looking at one side of the equation and isn’t enough. You need to acknowledge that there is no free lunch and that this is a tradeoff. You need to accept that your perceptions of how big the benefit of adding static typing is, how much it costs and how important it is are all subjective. If you want to convince me that my perception of their benefit is wrong, the best way would be to provide specific instances of bugs or production crashes caused by a type-assertion on an interface{} taken out of a container. Or a refactoring you couldn’t make because of the lack of type-safety with a specific container. Ideally, this takes the form of an experience report, which I consider an excellent way to talk about engineered tradeoffs.

Of course you can continue to roll your eyes whenever someone questions your perception of the value-curve of static typing. Or pretend that when I say the marginal benefit of type-safe containers is small, I am implying that the total benefit of static typing is small. It’s an effective debate-tactic, if your goal is to shut up your opposition. But not if your goal is to convince them and build consensus.