tl:dr: We made a gamejam-game

At the GPN14 we (meaning me and Lea, with a bit of help by sECuRE) participated in the gamejam. It was the first time for us both, I did all the coding and Lea provided awesome graphics.

The result is a small minigame “crazy cat lady”, where you throw cats at peoples faces and - if you hit - scratch the shit out of them (by hammering the spacebar). The game mechanics are kind of limited, but the graphics are just epic, in my opinion: 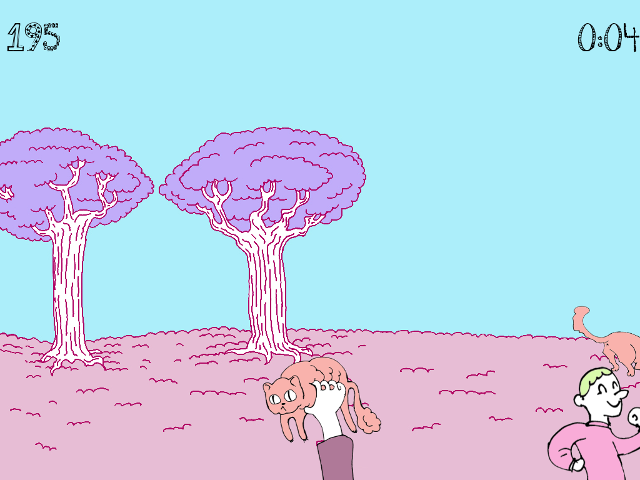 Because sounds make every game 342% more awesome, we added a creative commons licensed background-music. We also wanted some cat-meowing and very angry pissed of hissing, which was more of a problem to come by. Our solution was to just wander about the GPN and asking random nerds to make cat sounds and recording them. That gave a pretty cool result, if you ask me.

On the technical side we used LÖVE, an open 2D game engine for lua, widely used in gamejams. I am pretty happy with this engine, it took about 3 hours to get most of the game-mechanics going, the rest was pretty much doing the detailed animations. It is definitely not the nicest or most efficient code, but for a gamejam it is a well suited language and engine.

If you want to try it (I don't think it is interesting for more than a few minutes, but definitely worth checking out), you should install LÖVE (most linux-distributions should have a package for that) and just download it, or check out the sourcecode.

We did not make first place, but that is okay, the game that won is a nice game and a deserved winner. We had a lot of fun and we are all pretty happy with the result as first-timers.